What is a Zero-Sum Game?

In game theory and economic theory, a zero-sum game is a mathematical representation of a situation in which each participant’s gain or loss of utility is exactly balanced by the losses or gains of the utility of the other participants. If the total gains of the participants are added up and the total losses are subtracted, they will sum to zero.

Thus, cutting a cake, where taking a larger piece reduces the amount of cake available for others as much as it increases the amount available for that taker, is a zero-sum game if all participants value each unit of cake equally (see marginal utility).

In contrast, non-zero-sum describes a situation in which the interacting parties’ aggregate gains and losses can be less than or more than zero. A zero-sum game is also called a strictly competitive game while non-zero-sum games can be either competitive or non-competitive. Zero-sum games are most often solved with the minimax theorem which is closely related to linear programming duality, or with Nash equilibrium.

Many people have a cognitive bias towards seeing situations as zero-sum, known as zero-sum bias.

What Does Zero-Sum Game Mean?

The zero-sum property (if one gains, another loses) means that any result of a zero-sum situation is Pareto optimal. Generally, any game where all strategies are Pareto optimal is called a conflict game.

Zero-sum games are a specific example of constant sum games where the sum of each outcome is always zero. Such games are distributive, not integrative; the pie cannot be enlarged by good negotiation.

Situations where participants can all gain or suffer together are referred to as non-zero-sum. Thus, a country with an excess of bananas trading with another country for their excess of apples, where both benefit from the transaction, is in a non-zero-sum situation. Other non-zero-sum games are games in which the sum of gains and losses by the players are sometimes more or less than what they began with. 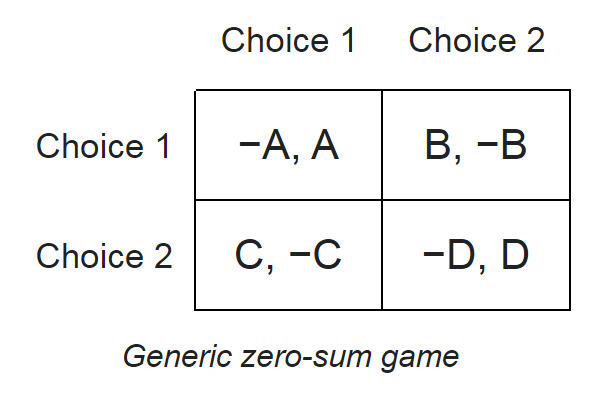 The idea of Pareto optimal payoff in a zero-sum game gives rise to a generalized relative selfish rationality standard, the punishing-the-opponent standard, where both players always seek to minimize the opponent’s payoff at a favorable cost to himself rather to prefer more than less. The punishing-the-opponent standard can be used in both zero-sum games (e.g. warfare game, chess) and non-zero-sum games (e.g. pooling selection games).

When applied specifically to economics, there are multiple factors to consider when understanding a zero-sum game. Zero-sum game assumes a version of perfect competition and perfect information; both opponents in the model have all the relevant information to make an informed decision. Taking a step back, most transactions or trades are inherently non-zero-sum games because when two parties agree to trade they do so with the understanding that the goods or services they are receiving are more valuable than the goods or services they are trading for it, after transaction costs. This is called positive-sum, and most transactions fall under this category.

Options and futures trading is the closest practical example to a zero-sum game scenario because the contracts are agreements between two parties, and, if one person loses, then the other party gains. While this is a very simplified explanation of options and futures, generally, if the price of that commodity or underlying asset rises (usually against market expectations) within a set time frame, an investor can close the futures contract at a profit. Thus, if an investor makes money from that bet, there will be a corresponding loss, and the net result is a transfer of wealth from one investor to another.

Is the Stock Market a Zero Sum Game?

Investors’ collective performance in the stock market relative to an index is a zero sum game. Since the value of an index includes all gains and losses, it is by definition, zero sum.

For example, when considering outperforming the market, every outperformance implies an underperformance or loss elsewhere.

However, the entire stock market system should not be thought of as a zero sum game because it does not meet the criteria to be a game with contestants. Only an individual’s performance relative to the stock market index is a game.

What is a Non Zero Sum Game?

A non zero sum game is a situation where there is a net benefit or net loss to the system based on the outcome of the game.

An example of what should not be considered a non zero sum game is a contest between a trade ship and a pirate ship, although it may look like one at first glance. Here, a victory for the pirates would mean gain of wealth, resources, and men (probably as prisoners), whereas a win for the trade ship would only mean a defeat of the challenge by the pirates. Here, the prize and losses being different for both the contesting parties do not qualify it as an example of a zero sum game.

Another example could be in financial markets, where competing firms collaborate to expand the overall size of their market. Creating an industry-wide organization would increase confidence in the industry and result in more profit for all competitors.

Non zero sum games don’t have to create a net positive result – it could also be negative as well. In the pirate example above, there is a case where the pirates win and it’s a net negative for the whole system.